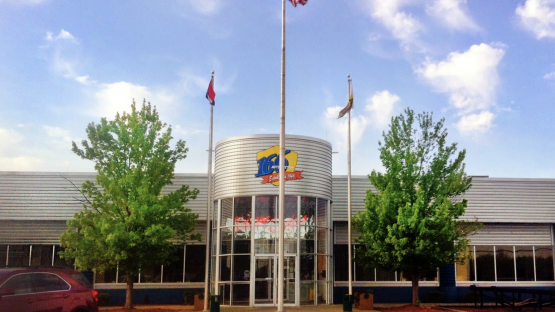 We at 166 Auto Auction are proud of our 70 Year history in the Mid-West Region.<br>

Founded sometime in the late 1940s by a man whose name has slipped into obscurity, 166 Auto Auction got its name from the original highway on which it was located on Highway 166, built to take the traffic load of the well worn Route 66. The first facility was an old boat works company just outside of the Springfield, Missouri city limits. The floors were dirt, there was no running water and the building was just a shell.<br>

Melvin Reid, a used car dealer in Carthage, Missouri acquired the auction around 1950 when the first owner, who owed Reid $2,000, offered him half interest in the auction to settle the debt. Reid took the deal only to find out that he had also acquired a manager who had accepted the same deal.<br>

Reid operated the auction for several years with dirt floors and no indoor plumbing and, still in the used car business; he was his own best customer. With sale fees of $5 and $10, there was little return on his investment, but the overhead was low. Rent on the building was $55 a month, auctioneers got $10 a sale, and the “help” were paid $2 a night.<br>

A few months later, to increase income, a Monday Night sale was added to the weekly Thursday Night sale. This brought about management conflicts, and Reid and his general manager flipped a coin to see who would run which sale. Reid got the Monday sale, the lesser of the two. After about three weeks of this arrangement, he borrowed the money to buy out his partner and began in earnest to build the business.<br>

Reid built a windbreaker to shield customers from bitter winter winds and he paid to pipe in running water from a block away. Tons of gravel were spread over the lot and a water truck was purchased to dampen the dust and keep the shine on the cars. Slowly but surely, business began to build.<br>

With cars still in short supply after the end of World War II, auto auctions nationwide were seen as dumping grounds for junk autos. Troubled by this image, Reid worked with National Auto Auction Association President, Tim Anspach and other leaders in the growing auto auction industry to develop an informative four-page brochure, The Auto Auction Story, which was the first major step in changing auto auction’s junk image. Reid went on to serve as president of the NAAA in 1964 and 1965 and was inducted into the NAAA Hall of Fame in 1975.<br>

To keep up with the growing and changing used car market, 166 switched from a night to a day sale and continued to grow. In 1959 the auction landed its first lease car sale, and added Ford, Chrysler and GM Factory sales in later years. In 1977, the 166 Auto Auction received a Ford Motor Company award for the largest sale east of the Rockies. 166 Auto Auction was also among the first to develop a computer system, which was then sold to other auctions. By the time Reid sold to Manheim Auctions in 1988, 166 had grown to a major three-lane, full-service auction.<br>

In 1992, Manheim knocked down the 40 year-old facility and replaced it with a new state-of-the-art five lane auction. In 2000, three more lanes were added and a 42,000 square foot Paint & Body Shop was completed across west sunshine. The auction employed a staff of 330 and averaged 1,100 to 1,600 in its Thursday consignment sale, as well as returning to the traditional Monday Night Sale, which averaged 300 units known as the Monday Night Express.<br>